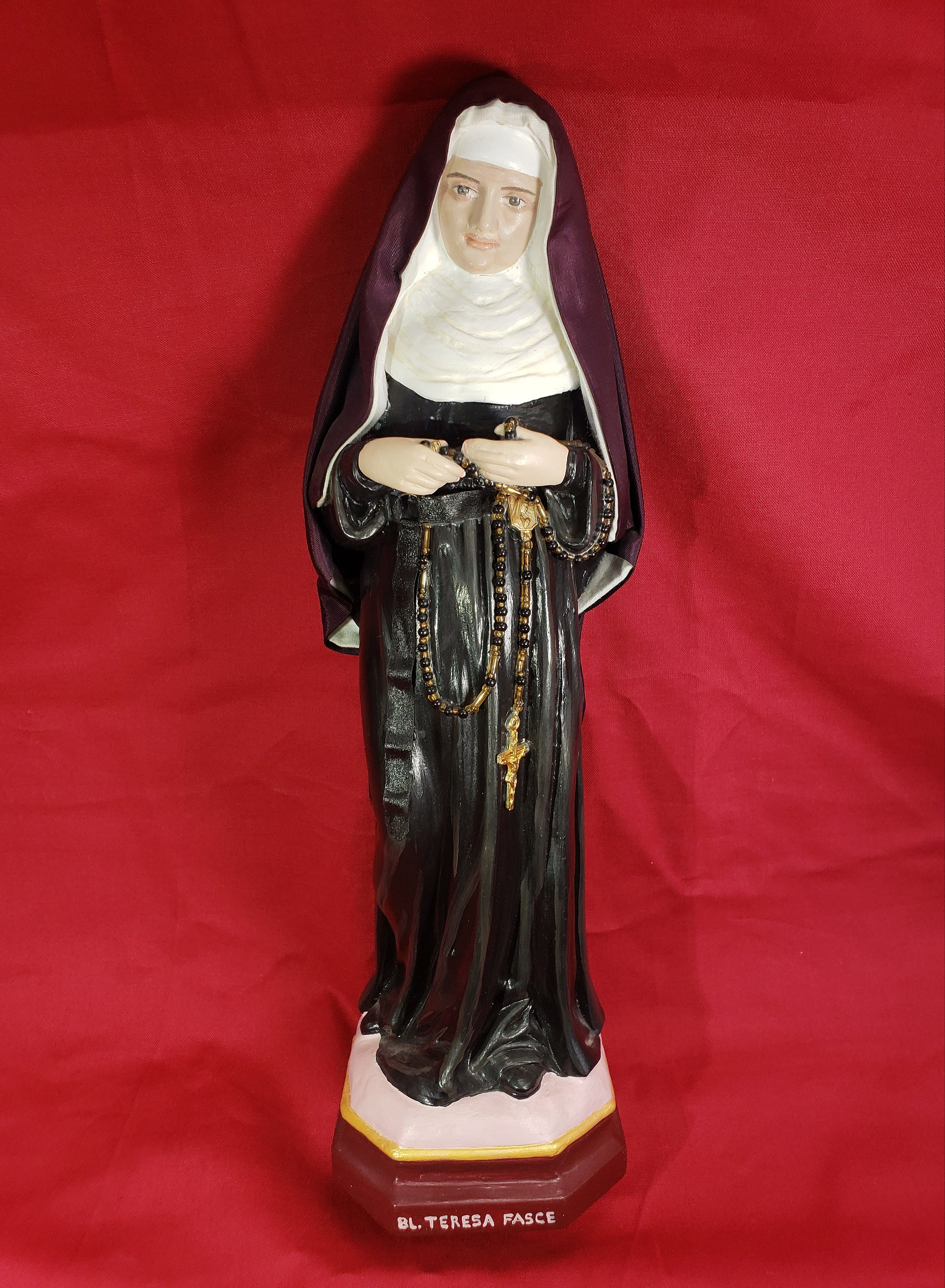 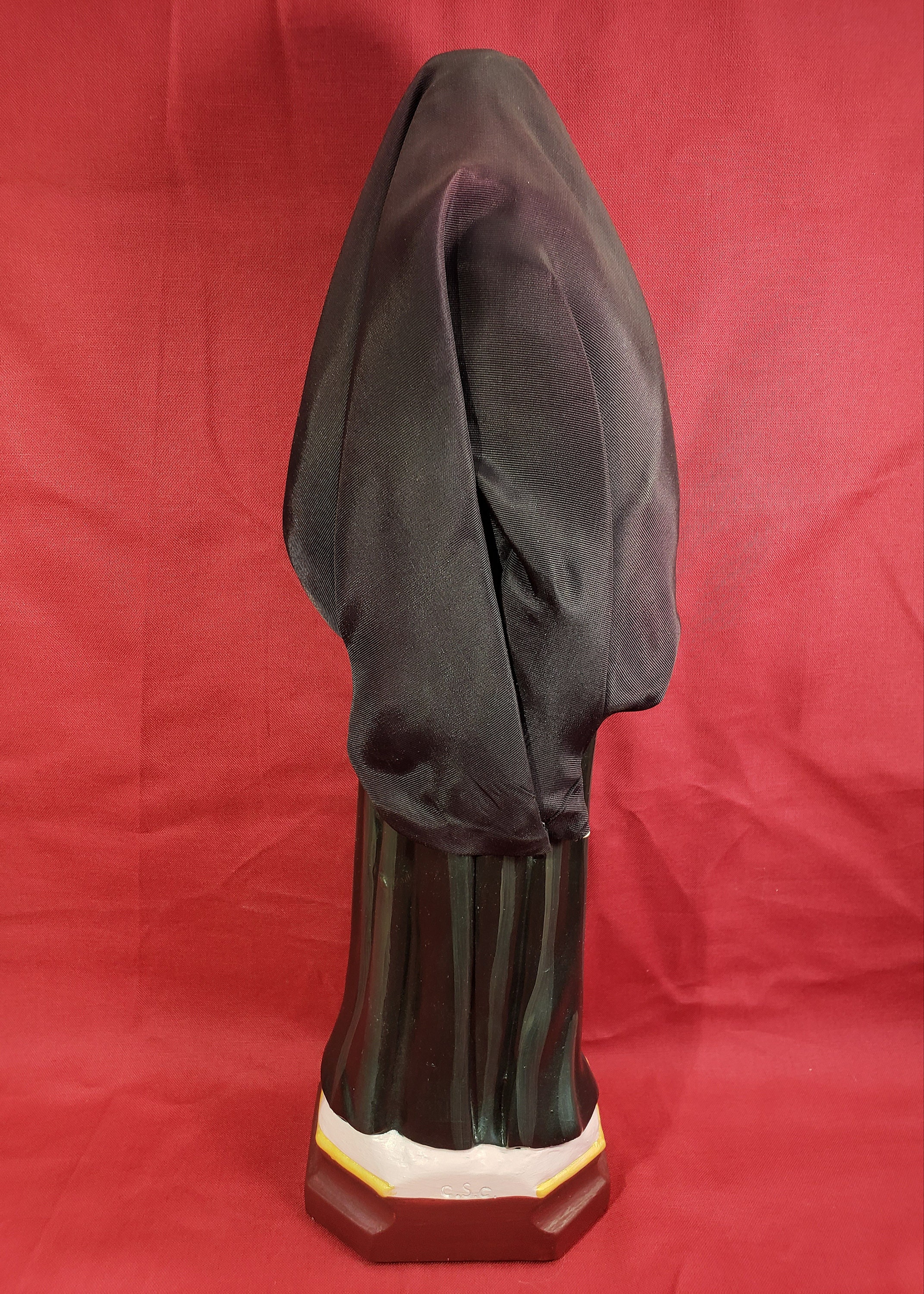 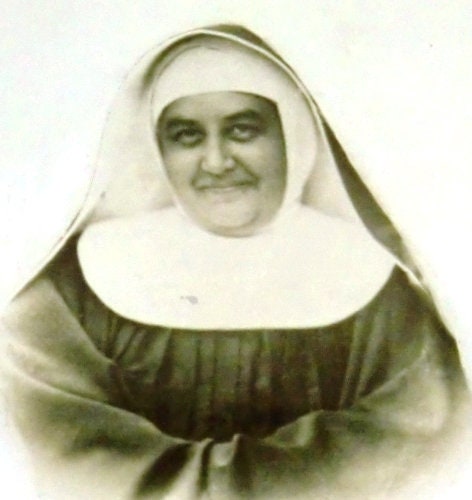 
This statue was commisioned to the founder of Images of Heaven, Joseph, a.k.a Heavenly Saints by an Augustinian priest 25 years ago. Fr. Degregorio wanted an image/statue of Blessed Teresa who was newly beatified since none were in existence at that time. The statue was made but never sold because the priest moved to Italy. Joseph kept the statue until he passed away in January 2019.

The statue is old and the veil has faded a little bit but overall it is still in great condition. It is one of a kind (only one made/no mold) and you will be the only person in the world who owns this particular statue.


Please read her story below.

Maria Terese of Cascia was born in Torriglia, a small town near Genoa, Italy in 1881 to a middle-class family. Her parents had her baptized with the name Maria, but throughout her life, she was called "Marietta."

Although Marietta lost her mother when she was eight, she was well looked after by her older sister. Religious values were taught at home and Marietta was enrolled in school where she did well. Marietta was lively and vivacious, and she responded well to instruction.

In Genoa, she attended the Augustinian parish of Our Lady of Consolation, a place where she would be greatly inspired to her life's vocation as a nun. Marietta met her confessor there, Father Mariono Ferriello, who encouraged her to pursue her vocation. Marietta was also taught catechism there along with signing. She also learned extensively about St. Augustine, whose spirituality greatly influenced her.

Marietta had been contemplating a religious lifestyle for some time, but the canonization of St. Rita compelled her to announce her intentions to her family, who took the news badly. Marietta's brothers were particularly negative about her decision. Still, Marietta was undeterred and she felt absolutely sure she wanted to enter the convent.

Marietta applied for admission to a Ligurian Augustinian monastery, but she was rejected, news which shocked and surprised her. The monastery's abbess, Mother Giuseppina Gattarelli, explained she felt that Marietta, accustomed to life in the city, would not be able to handle the spartan rigors of a rural monastery. Still, Marietta was tenacious; she reapplied and was accepted in 1906.

On Christmas night of 1906, Marietta was given her habit and one year later she took vows of chastity, poverty, and obedience. The name, "Teresa Eletta" was given to her.

Unfortunately for Marietta (now Maria Teresa Eletta) she discovered a monastery in crisis. A group of seven young sisters from Visso who were much more relaxed in their practice than the older sisters created a generational crisis. The levity and laughter did little to promote Maria's spiritual growth and disappointment and doubt began to develop in her mind. In June of 1910, Maria Theresa left the monastery to reexamine her decision.

However, Maria returned in May of 1911, more confirmed than ever. The following March, she made her solemn profession of the vows. She promptly protested the situation at the monastery by writing letters to the superiors. Impressed with her alacrity, she was soon appointed to Mistress of Novices in 1914. In 1917, she became Vicar, and in 1920 her sisters unanimously elected her Abbess. She would hold that position until her death in 1947.

Maria Teresa was remembered as a strict, but practical woman who was also very sweet to her community. She made clear to all that Jesus wants active, hard working brides, and that being such would be their duty. She rigidly observed the Augustinian Rule.

Despite her rigidity, her community remembered her for her great tenderness and friendliness. She was not considered a dictator, but a genuine spiritual leader with great charisma.

Maria Terese was also known for her great stamina. As abbess, she directed the construction of a new church for Saint Rita and a girl's orphanage. This project consumed much of her tenure, and in fact, the church was not completed until several months after her death.

Maria Terese also spent much of her time in illness, suffering from painful afflictions. She suffered with a malignant tumor on her right breast and was compelled to undergo two surgeries. She referred to her tumor as "her treasure" and explained that it was the most beautiful gift which Jesus had given to her. She also suffered from asthma, diabetes, and circulatory problems which caused great pain in her feet. She became very overweight and had difficulty walking. Later in her tenure, her sisters had to carry her in a chair.

Despite her pain, she never complained about her illness and she never slowed the pace of her activity. Her condition has been compared to the suffering of Christ, which like Jesus, she bore with patience and reverence.

Maria Terese died on January 18, 1947. She was laid to rest in a crypt next to her beloved St. Rita. Pope John Paul beautified her in July 1997.

Mary, Loving Mother of Consolation, I turn to you now in this time of need. I come to you confused and fearful, anxious as a little child.

I know you really are my Mother. You see me with eyes filled with love and understanding. Touch me through your prayers and hold me in your love, that I might continue strong and unafraid in these days of difficulty and hurt.

Gentle Mother, I now confide to you my greatest need (pause and reflect). Please pray that the loving will of Our Father may always come first in my heart and in my mind.

Help me to reflect on the needs in your own life, Mary, the days when you, too, knew concern, fear, loneliness and grief. You always turned to Our Father and gave yourself to Him completely. You knew His love and showed us how to live in it.

When I remember the love of your Blessed Son for me, I am less afraid. When I think of you I can smile. Pray for me, Mary. Guide me always in your love, and lead me to your Son, Jesus. Amen.

A PRAYER FOR PATIENCE

Blessed Mary, Mother of Consolation, pray with me for the virtue of patience. There are so many times when my lack of patience keeps me from becoming the kind of person God wants me to be.

Guide my thoughts to you and the example we have in your own life. Help me to become patient, as you were patient. Through your guidance, may I become more accepting of others around me. Assist me to welcome difficult times with a patient heart.

May I be patient, Mary, as was your beloved husband, Joseph. His quiet acceptance of the will of Our Loving Father should be an example for me always. His patience was most wonderful in the eyes of God.

Pray for me, dear Mother of God, that I will allow the Father to come into my heart and help me grow in patience. Amen.

We will replace your statue only in the unlikely event that it arrives broken or otherwise damaged during the shipping and delivery process. You will return the damaged statue to us (at our expense). After it arrives and we confirm the damage we will make another statue of the same personage and size and ship it to you as a replacement with no additional expense to you. There is a 15 day return policy for PLASTER STATUES only. Buyer has to pay for the shipping.